Food takes quite an unusual role in the AoE economy as its main harvesting source from the mid-game onwards - the farm - is a renewable resource spot. Other than the natural resources that are generated with the map, the farming economy relies on the constant reconstruction of the production building by the player. In this blogpost we will explain how resource spots can be restocked in openage and also how we implement the process of queueing farms in the mill.

Before go into detail about the concrete API implementation, we should make clear how the farming economy from AoE2 works on an abstract level. For that purpose we prepared a simple diagram.

Note that we leave out unimportant aspects such as delivering food to a drop site or deleting the building. We focus solely on the standard life cycle of the farm. A stylized hand indicates that the task is initiated by the player through the GUI, while tasks with a stylized person are automatically executed by a villager.

As seen above, the process of harvesting a farm can be divided into these steps:

One problem that remains is that the process described in the previous section is still very specific to farms. As we are writing an API, we would like to generalize it as much as possible. Particularly, we would like to fulfill these requirements:

With this in mind, we can now look at the API implementation. 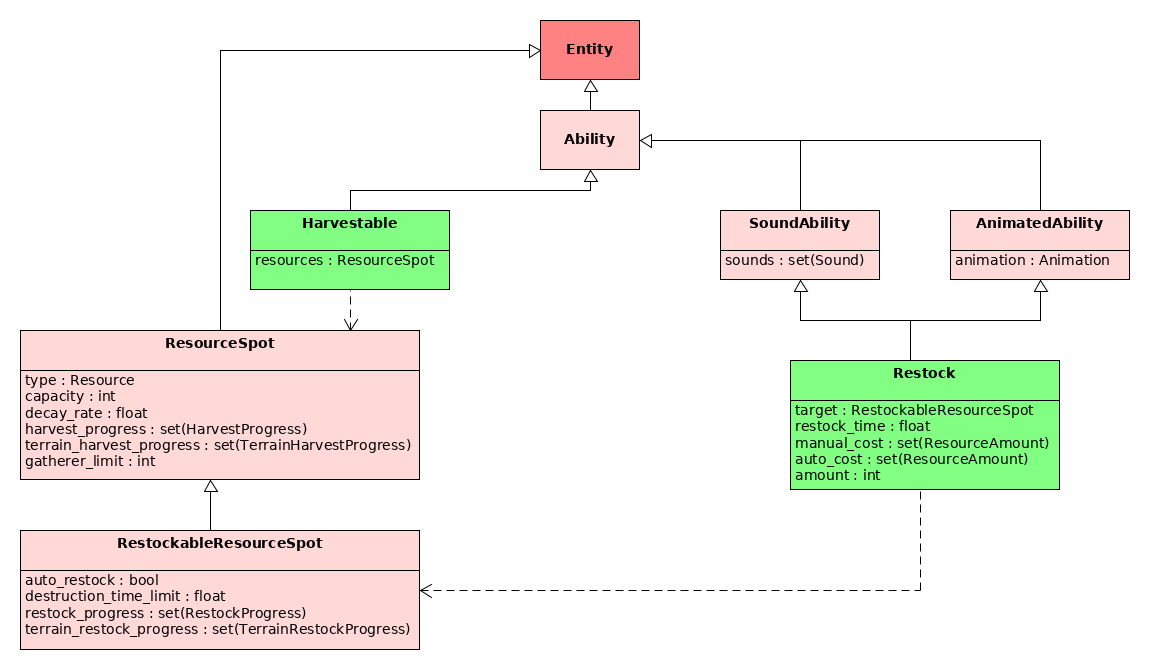 There are two abilities involved in the restocking process. On the left side we have the ability Harvestable of the farm, which contains the ResourceSpot that villagers can gather from. Villagers get the Restock ability with which they can fill up the resources again.

Restock targets a specilization of ResourceSpot which is called RestockableResourceSpot. A restockable resource spot works like a normal resource spot, except that it is not immediatly destructed after the resources are harvested. Instead, it will be depleted until it is either restocked or the time set in destruction_time_limit has run out. We can also decide with auto_restock whether queued/automatic restocks are allowed. The two sets of Progress objects contain graphics that are used when a certain percentage of restocking is complete. It is important to stress that normal ResourceSpots can be turned into RestockableResourceSpots through patching.

The Restock ability can be used on a restockable resource spot after its contents are depleted. Though its attributes look very similar to those of Build, the two abilities operate completely independent from each other. Restock is only concerned about the resource spot it is supposed to refill (target) and will not reconstruct the whole building. The necessary time to restock is stored in restock_time. We can also set the amount of resources that should be restocked. The costs for a restock action is split into two options: manual_cost is used when the player initiates the restock (like right-clicking on a depleted farm), while auto_cost is used when villagers automatically execute the restock, provided the resource spot allows this. Both costs can be the same, but it can be handy to set them to different values as we will see now.

When we implement our Restock ability for the resource spot of AoE2 farms, we have to initialize manual_cost and auto_cost. The naïve approach would be to interpret both cases as "build farm" actions and set both values to 60 wood. But this would not suffice. As we can see in our first diagram, the automatic restock does not really cost 60 wood, it costs one farm from the queue in the mill. That begs the question of how we actually queue farms. Fortunately for us, it turns out to be quite trivial.

First of all, the farm queue does not exactly represent buildings. It is probably closer to a "I can rebuild my farm"-ticket for the villager. Secondly, these tickets are available to all villagers and are not tied to a specific mill. They can be used from everywhere on the map on a first-come, first-serve basis. If you think about it, these tickets work like the other four resources in the game, with the exception that they cannot be gathered by the villagers. Thus, we are going to interpret the elements in the queue as actual resources. We will introduce a fifth Resource called FarmRestockResource which will work exactly like Food, Wood, Gold and Stone.

Since FarmRestock will probably not be gatherable on the map (although that is possible), we have to find another way to acquire it. For that purpose, we can use the TradeResource ability which is also used for selling and buying with the market. In the context of farming, the mill will get a TradeResource ability which sells 60 units of Wood for 1 unit of FarmRestockResource. We can then set auto_cost in the villager's Restock ability to 1 unit of FarmRestockResource which is therfore consumed whenever a villager automatically restocks a farm.