In a list of essential features for strategy games, attacking would probably be sorted in first or second place. Of course something that important should not be missing from the openage API. This time we are going to look at how units damage each other with the Attack ability. 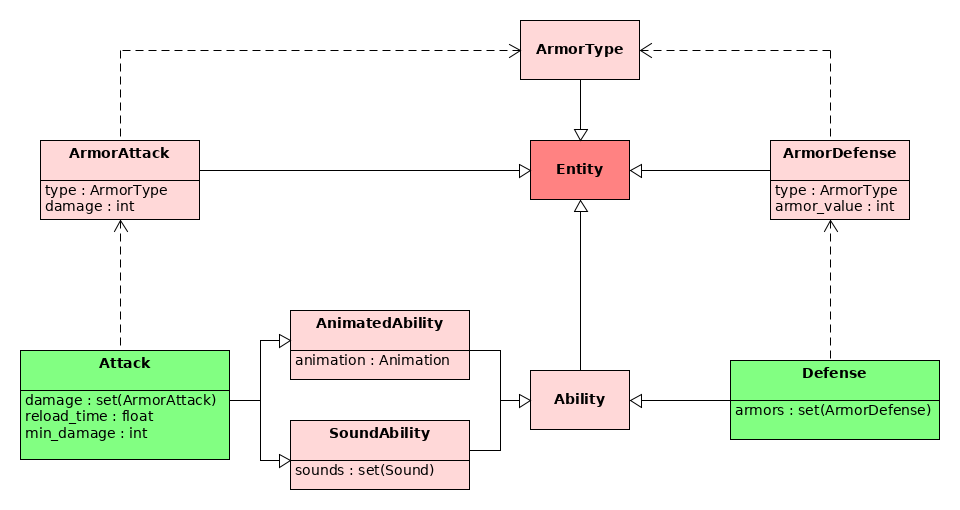 In the current API design, damage is dealt as a flat amount and is always directed against a specific type of armor. A single Attack can damage several armor types at once through the definition of ArmorAttack objects in the damage member. Every ArmorAttack stores the damage done against a type of armor. On execution of the attack, each damage value from ArmorAttack the objects of the attacker is matched against a defender's ArmorDefense object with the same armor type.

It's best if we look at a simple example before explaining the system further. 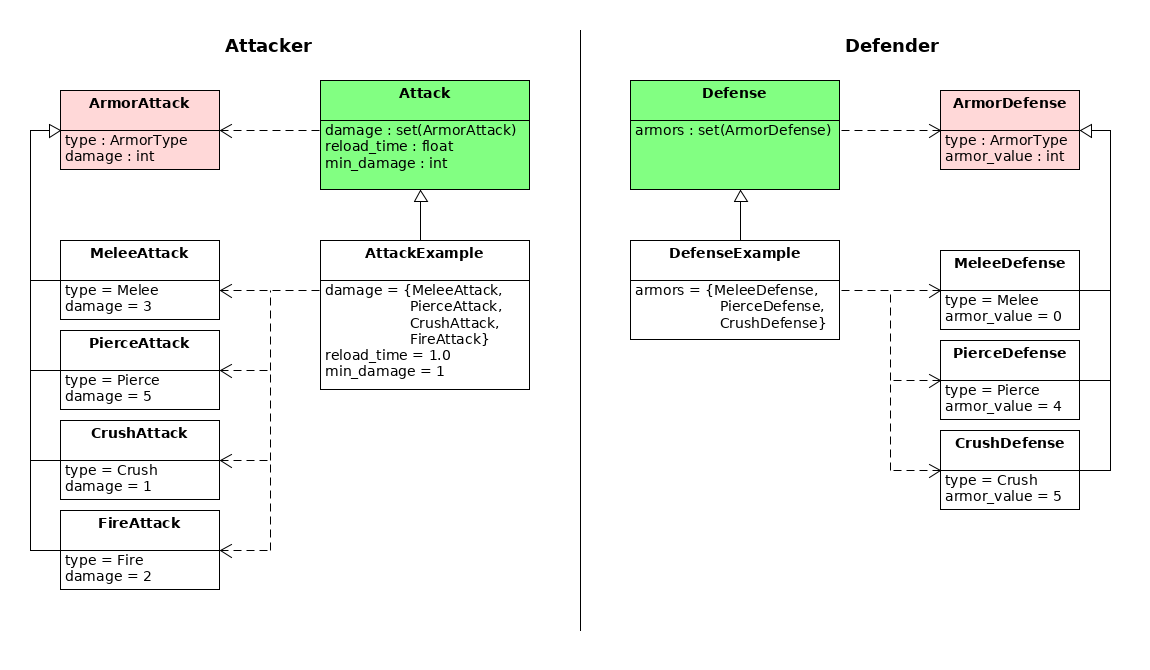 The above diagram gives us very basic definitions of one unit's Attack and another unit's Defense abilities. For convenience, a table shows the comparisons between the corresponding damage and armor values of the armor types.

The calculation for the Melee and Pierce armor types is very straight forward. armor_value in ArmorDefense is subtracted from damage in ArmorAttack which yields the following results:

The situation for the Crush armor type is a bit more tricky because subtracting armor_value from damage would result in a negative value. This behavior is generally undesirable as negative damage can have weird effects. Therefore, the engine will always round negative damage against an armor type up to 0.

For the last armor type we are facing another special yet common case of the damage calculation. The attacking unit has an ArmorAttack object for the Fire armor type, but the defender does not have an ArmorDefense object with matching armor type. Intuitively one might assume that the amount of fire damage dealt is 2, since the defender seems to have no armor against it. However, this is not true. The engine will only calculate damage when there is an armor type match between an ArmorAttack and an ArmorDefense object. If there is no match, the damage defaults to 0. We've already seen the correct way to give a unit no defense against an armor type when we look at MeleeDefense. Here any attack against Meelee armor does full damage because the defender has the matching armor type and armor_value is set to 0.

The behavior is a bit unintuitive because it inevitably means that an attack will deal no damage when a unit has no ArmorDefense objects defined in armors, which goes against the expectations of the majority of people. On the other hand, resistances against specific types of damage can be modelled much easier.

In the end the individual damage values are summed up and then compared to min_damage of the Attack ability. The engine chooses the greater of the two values. In this example min_damage was 1 which is smaller than the calculated damage value 4. The overall damage is therefore 4.

At runtime there can be situations where the damage is modified further, e.g. because of a height advantage. But that's a story for another time. It is also important to note that openage will likely support other attack systems that use a different damage calculation, like percentage based armor or attacks with a block chance, in the future.

Other types of Attack

In addition to the normal Attack ability, the API supports three more special versions of attacking. AreaAttack does area of effect damage with an optional damage dropoff over distance. The SelfDestruct ability is an even more special AreaAttack where the unit kills itself during the attack. With RangedAttack the attacking unit can attack from a specified distance and does not have to stand right next to the target. RangedAttack must not be confused with ProjectileAttack, since the former does not require any projectile related data.

The first striking difference between Attack and ProjectileAttack is that they are not directly related (other than the previous "special" versions of Attack). This is rooted in the fact that ProjectileAttack merely enables a unit to fire one or more projectiles. Each projectile can have its own Attack ability that is executed on hit. In other words: The units with ProjectileAttack are not doing damage, it's the projectiles they shoot.

Although behavior for abilities like Attack is hardcoded in an engine function, the execution outcome should be allowed to deviate slightly. Preferrably we would want a way to define behavior edge cases have an influence on the calculation, e.g. when we attack with a height advantage. How that is handled is discussed next week, when we take a look at Bonus objects.